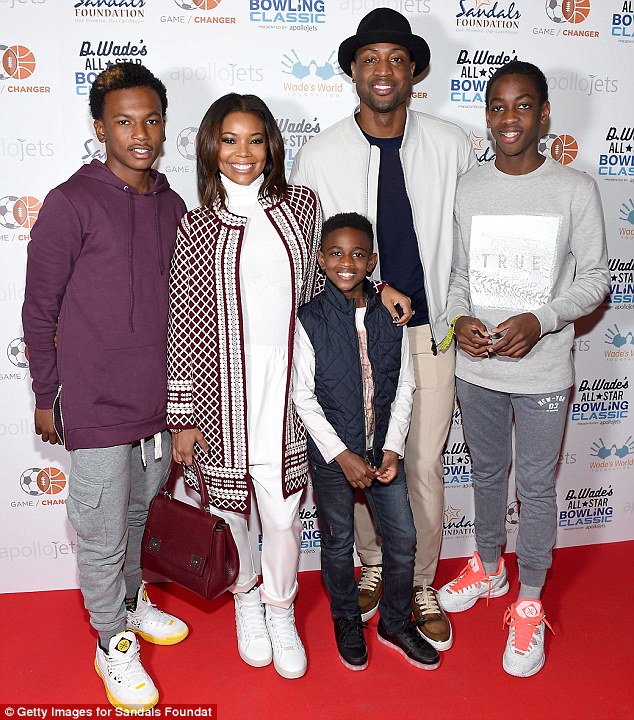 Dwyane Wade (pictured with wife Gabrielle Union, his children and nephew Dahveon Morris, left)  Zaire (right), 14, and Zion (center), 9, to Chicago six months after moving from the Miami Heat to the Bulls

Obnoxious Report!  The year of Dwyane Wade’s final year in the NBA friends and fans have been celebrating the Champion all over the nation.  However, he is not the o ly one in the family celebrating, but his son is also as he comes out of the closet.  For months there has been speculation online, whether NBA star Dwyane Wade’s 11 year old son was gay. Now the speculation is over, the young man has come out – with the support of this father and step-mom Gabrielle Union.

Gabrielle attended the Miami Gay Pride parade with their 11 year old step-son Zion, and she and Dwyane posted pics showing them at the event on social media.  Unfortunately, due to the team’s basketball seclude D Wade was unable to attend Miami Gay Pride with his son and wife.  A huge statement of support and progress would have been made if he had been able to be there along side Zion.  Only will tell how support D Wade will be and if he will be physically present at more LGBTQ events.  Seems Zion might be a little EJ.

D Wade’s NBA schedule (the Miami heat are in the midst of a playoff push) made it impossible for him to be at the parade to cheer on his son. But the proud dad made sure to let his feelings be known on social media..

He reposted a pic of wife Gabrielle and son Zion together. Dwyane was captioned as saying, “We support each other with pride”.

D Wade posted another picture of Zion, this time he’s carrying a rainbow flag and surrounded by family and friends. D Wade captioned, that pic “Zion had his own cheering section today. Wish I was there to see you smile”

People have been speculating for years, that the 11 year old Wade was gay.

Clearly the young man comes from a loving and accepting family – who supports him with love. He’s a very lucky man.

Dwayne’s other son Zaire shared a sweet photo with his little brother and said these kind words to him: “Love you bro, no matter what. Gotcha back, kid. Support gang!”

Some are applauding the family, while others say the child is too young to be at the event.

Previous Post Mother Gloria T. White’s Homegoing Arrangements Have Been Finalized
Next Post Roy McClendon-Thompson Rumored To Have Killed His Best Friend Micheal Maze A Week Prior To Killing Male Escort James Curtis Jones On The Same Day He Bonded Out Of Jail In This Atlanta Tragedy Of Sex, Lies, Murder, Money, Homosexuality, And The Church!!!