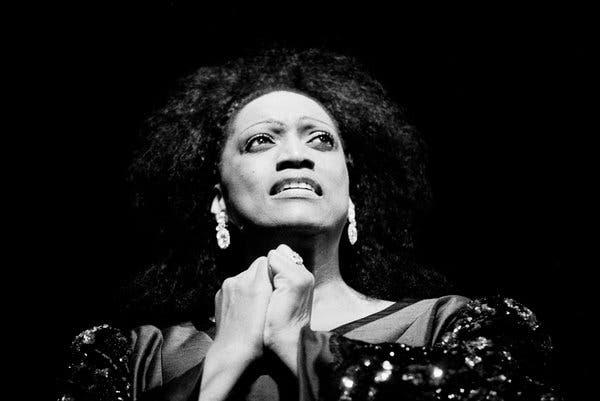 Jessye Norman performing in 1991 at the Concertgebouw in Amsterdam.

My career in Media has afforded me some of the most incredible opportunities to meet and interview people that most folks would only dream about meeting.  The woman with the giant voice was a Dica for real and not just someone you walked up on for an interview.  The best way I could think to approach her was to remind her of the time she sang with the World Renowned Morehouse College Glee Club for the Opening and Closing Ceremonies Of the 1996 Olympics.

With that introduction she smiled and said for me to come have a seat.  Her responses to my questions were strong and well thought out as she was, but she did show she had a down home side about her at the same time.  We laughed when I asked about the rumors of a rivalry between her and Kathleen Battle.  If looks could kill I would have died that day!  She will be greatly missed.

International opera star Jessye Norman died Monday at the age of 74, according to her agent.

The New York Metropolitan Opera described Norman as “one of the great sopranos of the past half-century.”

“Norman sang more than 80 performances with the company, dazzling audiences with her beautiful tone, extraordinary power, and musical sensitivity,” the Met said in a statement.

Norman won four Grammy awards and a lifetime achievement award from the Recording Academy in 2006.

“Jessye Norman was one of the greatest artists to ever sing on our stage,” said Metropolitan Opera General Manager Peter Gelb. “Her legacy shall forever live on.”

Norman was born on September 15, 1945, in Augusta, Georgia, according to the nonprofit research and education institution History Makers.

The Met, which extended condolences to Norman’s family and friends, said she “will perhaps be best remembered for her glorious, definitive portrayal of Strauss’s Ariadne auf Naxos,” an opera she performed in 1993, according to History Makers.

In a 2014 video, Norman said she was 17 years old when she received a full-tuition scholarship to Howard University, where she graduated in 1967.

Norman then attended the University of Michigan on a teacher fellowship, graduating in 1968, History Makers says.

In 2002, Norman founded the Jessye Norman School of the Arts. The school’s website says it’s an “after-school program designed to develop and nurture the artistic and creative talents of students.”

Norman said in the 2014 video that because of her full-ride to Howard and fellowship in Michigan, she understood what it meant to receive assistance, especially in the arts.

The Jessye Norman School for the Arts said in a statement its faculty, staff and students “are tremendously saddened” by their founder’s death.

“As an opera superstar, she commanded the world’s stages, but here in Augusta, she quietly used the arts to make a positive impact on the lives of hundreds of children each year. The world knew her voice and our school knew her kindness and generous heart. She challenged all of us to live up to our full potential and to represent something larger than ourselves. She will be greatly missed,” the statement read.

Norman had a huge influence on many musicians and had many fans internationally, many of whom shared their condolences on social media.

Singer and composer Rufus Wainwright tweeted “the world has lost one of the greatest voices that we have ever had and heard. She poured herself out for us.”

Pianist and composer Jason Moran thanked Norman on Twitter for her voice.

“The phrases she sang charged the air. With deep appreciation,” Moran tweeted.

Musician Questlove said on Instagram: “God Rest Your Soul Queen Jessye. #JessyeNorman.”
The Canadian Opera Company also tweeted that Norman’s death was “a great loss for the world of opera.”

“Thank you for sharing your incredible gift with all of us, Ms. Norman,” the company tweeted.