Bishop Johnathan Alvarado’s Church Total Grace Christian Center Files Bankruptcy–The Church Filed Chapter 7 On November 5, 2012–Rumor Has It That The Huge Payoffs To His Young Male Lovers Is The Cause!!!

Most of you that follow my work know that I do not say things unless I know them to be fact and I always give accurate information, which is why you read my blog in the first place. You may recall that back in March of 2011 I reported that Bishop Johnathan Alvarado was rumored to be a child molester. No arrest had been made in the case and the case nor had he been formally charged with a crime. One of the members of my Obnoxious Street Committee has informed me that the church had been quietly paying off boys and their families for them to keep quite about the sexual contact with Bishop Johnathan Alvarado, Senior Pastor of Total Grace. Allegedlly it is common knowledge among insiders that Johnathan is bisexual and is rumored to crave the affection of young men.

Oddly enough the very man that was a former member of the church and later became a pastor as well, Shaun King left Atlanta like he was on the run. Relocating to Los Angles, King will not even speak on the matter anymore when he is contacted. Shaun King at one time was the personal assistant to Bishop Alvarado and boasted of having key information on the sexual appetite of Johnathan for teen boys. Shaun King made a number of claims about Alvarado on Facebook and Twitter until he was contacted by local Atlanta news and the authorities.
Do note that these are some very serious allegations against Bishop Alvarado, but he has never been formally charged with a crime. However, rumor has it that Johnathan is a PJD (Pineapple Juice Drinker, Obnoxious Media’s phrase for On The Down Low) and has a liking for young boys. According to Shaun his former pastor liked young teenagers that might have been under 16-year-old, the legal age in Georgia to be in a sexual relationship. 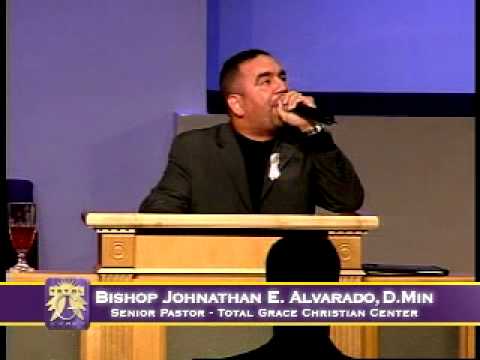 According to a good snitch that is currently a key member of Total Grace who has informed me that it was two young boys in an actual lawsuit that was never filed do to be have been settled before it got a chance to hit the DeKalb County Clerks office. The good snitch went on to share that only two employees remain at the church now that worked during the very difficult time in the ministry of the church back in 2011. It is said that three elders, two pastors, and the worship leader all left due to finding out about the awful things Bishop Alvarado had allegedly done with the young boys. The snitch said they could not really share with me all they know because they are afraid people would be able to figure out where the information is coming from, but they said it was very interesting why Johnathan left New Birth years ago while he was under the leadership of Bishop Trick Daddy Eddie Long, who is another alleged PJD and settled four lawsuits out of court with young boys that accused him of having sex with them and one that did not even have to file a lawsuit to get paid.

However all of this just might be true due to Bishop Johnathan Alvarado having filed bankruptcy in November of last year. According to my snitch that is an insider at Total Grace, Johnathan has yet to tell the church. Allegedly he was going to make the announcement at the Watch Night Service then he was going to do it the First Sunday of 2013, but he could not work up enough courage. As a result, I thought I would use my platform of Obnoxious to help Bishop Johnathan Alvarado tell the world he has gone bankrupt. He currently has been preaching about follow the cloud, seems to be a popular them since Apple has the memory cloud. Well, Johnathan might have get his head down out of the clouds and face reality that he is broke. Many of us want to know if it has been all of the alleged huge pay offs that he has had to fork over to his male teenaged lovers and their families to keep him from having to deal with this ungodly behavior in an open court. Now it might not be true, but it does make you wonder. I am going to enjoy watching how this one plays out now. Read a copy of the Total Grace’s Bankruptcy filing for yourself!